The Last Design Wall Monday of the year...

*
Fa La
La La La
La La La La
!
Well, it's all over... the presents are unwrapped and you have leftovers falling out of the refrigerator..  Now comes the fun part!  You get to reclaim your sewing room!  Mine turned into wrapping central and a warehouse of wrapped presents..along with storage for the extra table and chairs and at one point two bicycles were parked in there..
So here is my design wall today... 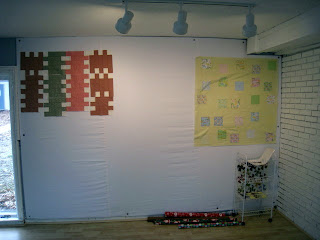 That wrapping paper needs to be put away for another eleven months..  On the right is a charity baby quilt...Sometime in the last few weeks I put the blocks together so now it needs quilting..  And the blocks on the left are part of a quilt that I started back in September at a sew-in.  The pattern is by  Kristy who is president of our Modern Quilt Guild in St Louis... It was featured on Moda Bake Shop..
It always takes me awhile to get back into the pattern once I have left it for awhile..So far I have pulled the finished blocks out and separated the other pieces I have.  Today I hope to get back into the pattern and figure out where I left off...lol
So I will leave you with a photo of the tree right before we had to wake up the son and his girlfriend so they could open presents...it was 9 am and even though we had turned up the sound on the TV...Opened his bedroom door and let the dog in...there still was no sign of life...  Finally I went in and said "Merry Christmas, get up!!"...lol  Then I let him go to her room and wake her up...(yes, we are a PG family, no co-inhabiting til married) ...  Everything was a hit..
Ha...see that big red plastic bag on the right side?  Have you ever tried to wrap a body pillow?  I could not find a gift bag or box big enough, so I just stuffed it right back into the target bag and tied it shut!!  The son opened the body pillow cover and could not figure out what it was... I finally told him that the other part was in the bag...  He liked it then... lol
I of course was spoiled by Santa...A bird feeder to hang outside the sewing room window, a GC to a great local quilt shop, a Garmin. new wallet and a Flat Screen TV for the sewing room...which I have decided to return.. I have a perfectly good TV and I would love to have a DVD player...Now that I have a real library I plan on utilizing it to borrow some good movies to watch while I sew...
The grandkids gave us a selection of games they enjoy to keep at our house...We got Jinga, Sorry and Phase 10.    Can't wait to have a game night!
And I think the grandkids all loved their presents... They were all here on Christmas Eve...I decided that this year we would have a Mexican food buffet... We would eat and then open gifts... Then we realized "someone" had forgotten to put the chicken enchiladas in the oven! LOL  So we popped them into the oven for 40 minutes and changed the plans...we opened WHILE dinner was cooking...
And we had Birthday Cake for a special grandson who turned NINE!! on Christmas Eve...Chocolate cake, chocolate icing and sprinkles baked by his Great Aunt Cupcake..
So that's it for 2011...no more design walls this year... On to 2012!!
Nancy
Posted by Nancy at Monday, December 26, 2011 5 comments: Links to this post 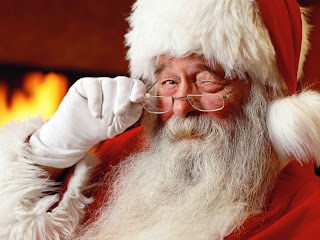 Merry Christmas Everyone....
Posted by Nancy at Saturday, December 24, 2011 3 comments: Links to this post

Merry Christmas to me!!

I read a ton of blogs...I read for inspiration, tutorials, information, humor, ideas... many reasons..

Occasionally a blog I read has a giveaway...everyone loves giveaways and I used to add my name to each one in the hope I would win something..  the problem was I didn't care WHAT I won...and so I have some items in my sewing room that will never be used as they aren't my taste.  No more.. Now when I see a giveaway I look very closely and say to myself "will I use this", "Do I like this style", "Do I like the (insert giveaway item here)''...  Most of the time I will pass...I will not comment or if I comment I will let the blog owner know that I am not interested in the giveaway...

Here are two of those - They were both delivered today even though I certainly wasn't expecting anyone to add a trip to the post office to their last minute list of many things to do before Christmas...

First up is a giveaway by Pat Sloan..  Pat was the very first designer I stumbled upon after starting to quilt..  I even went on a McCalls Cruise because she was a teacher... She has such fun patterns and her great sense of humor and laughter is contagious...  This is what I won...

A Simplicity Deluxe SideWinder...  It will be well after Christmas before I have a chance to unpack and play with this... but I think I should get loads done if I don't have to stop, unthread my machine and wind a bobbin all the time..

And then I was completely surprised to find out that I also won these from Amber at A Little Bit Biased...


Amber has a great blog with tutorials, Tuesday Tips and more inspiration than I will ever need.


If these two blogs aren't on your daily list of must reads...go visit..you might find something you like..like a giveaway!!

Merry Christmas to you and yours...I hope you all have a wonderful Holiday Season with family and friends...  I'll be back after the first of the year.

Nancy
Posted by Nancy at Friday, December 23, 2011 6 comments: Links to this post

But I am having a bit of separation anxiety...


But I need to do it....I need to stuff her into a dark gift bag and surround her gently with tissue and send her off to her new home on Christmas Eve.  I fear there will be a few tears...mine...

I know exactly what I will doing the week between Christmas and New Years...making more of these..I am going to have the change the design a bit...the backing on this one is pure white.  That won't last at my house...so the back will have to be a dark brown but the front will look just like this one...

Have I got the pattern for you....

I didn't know I wanted to make a last minute gift and as I was reading some blogs I clicked over to Amanda Jean on CrazyMomQuilts.  Specifically this post...  She wrote up a pattern, started up a little shop, posted about it, I read it, I bought it and it's DONE!!

It took me three hours from start to finish...I think it would have taken less time, but I kept stopping to watch listen to Downton Abbey on PBS...(and now I read that I will only be seeing four  episodes instead of the UK version which  is seven episodes... grrrr... I might need to buy this on DVD. Oh I just found it at my local library...YIPPEE!!)

I thought this would fit my current couch pillows, but alas mine are too puffy...so off I go to Joannes or Hobby Lobby with my coupons to get pillow inserts...today...before we get any more rain...and I will need to build an ARK!!

I just know that more of these pillows are on my list...for next year...cause now I have to catch up with the cleaning and laundry and ironing and cooking and ...that won't be near as fun as it was to sew this up...

So where do you buy this pattern?  HERE... CLICK HERE... and while you are waiting for the pattern to be sent to you...hurry and get all your other Christmas stuff done...cause you are going to want to start this immediately...and you will need to hurry quick fast like a bunny cause it's a PDF and comes fast....

um.... if you run over to Amanda Jean's and buy the pattern, come back and tell me and I will put you into a draw for some precut Veranda by Amanda Murphy for Robert Kaufman..exactly like I used in this pillow..  You will have to add your own background but it doesn't take much..

Nancy
Posted by Nancy at Tuesday, December 20, 2011 8 comments: Links to this post

This is all sitting in front of my design wall.. 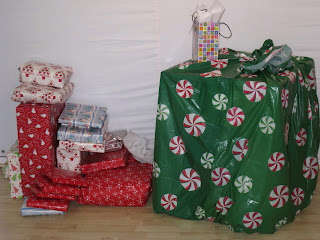 I finally finished shopping yesterday..that husband of mine is so hard to buy for...but with the help of some elves at his favorite store I managed to get'er done...  Now to wrap the last few...

I am already starting to think of Christmas next year...and what I can make for everyone.. I might challenge myself to make a few each month and sock them away...

See all the Design Wall Monday posts here at Judy's...

Nancy
Posted by Nancy at Monday, December 19, 2011 6 comments: Links to this post

a little bit of sewing...

It's been quite the month and we still have a week to go..  So far I have..

and because I had some flannel I made some pillowcases...

I met some great friends in Mexico and we did a little retail therapy and lunch...
And I was given this beautiful covered notebook as a Christmas present from a wonderful friend... 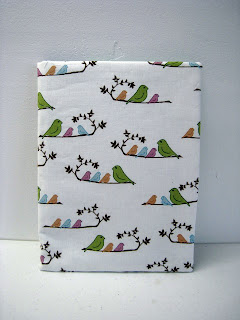 I hope to get it together and post about a "surprise anniversary party" sometime this week... in the meantime I need to run to the grocery store and then I bought a little something that caught my eye..and I know I have a bit of stash that is just itching to be sewn together...

Nancy
Posted by Nancy at Saturday, December 17, 2011 4 comments: Links to this post

These have kept me in the sewing room the last week. I followed this tutorial with only one change..
Two of these have the large size crayons but the other six are for older children and I wanted to use colored pencils.. All I did was change the stitching lines for the pencils pockets to one inch apart.  Then it will hold 10 colored pencils which is exactly how many are in the package from the dollar store.. 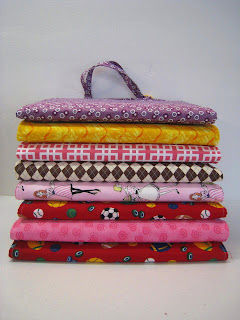 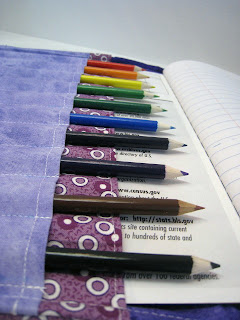 They are all wrapped in Christmas paper and ready to go to our family party on Sunday..  Each grandchild, niece and nephew will get one..  I hope they like them..
Posted by Nancy at Thursday, December 01, 2011 12 comments: Links to this post

From my family to yours...

Happy Thanksgiving
Posted by Nancy at Thursday, November 24, 2011 No comments: Links to this post

All content and photos are mine and not to be copied or distributed in any way.....thank you 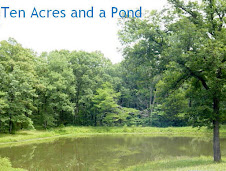 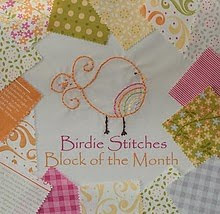 Nancy
Missouri, United States
Thanks for visiting... I love to quilt and hand embroider and sometimes I will blog about my grandkids... 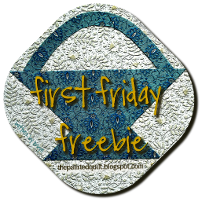 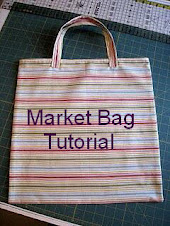 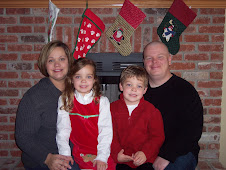 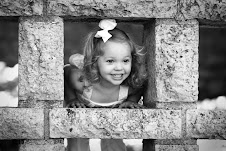 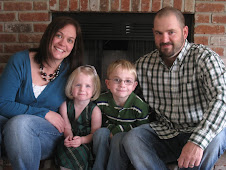 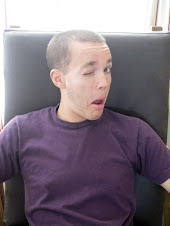